I know truth when I hear it. U.S. Soldiers are Waking Up!!!

U.S. Soldiers are Waking Up!!!

I was struck by Mike Prysner’s honesty and humility. Every soldier we sent to war is injured. They have to live the memories.

This country should never have gone to war.

My name is Mike Prysner. I joined the Army and went for basic training on my eighteenth birthday in June of 2001. I was assigned to the 10th Mountain Division and in March of 2003 I was attached to the 173rd Airborne Brigade deployed to norther Iraq.

Um, so when I first joined the Army, we were told that racism no longer existed in the military. A legacy of inequality and discrimination was suddenly washed away by something called the ‘Equal Opportunity Program. We would sit through mandatory classes and every unit had this EO representative to ensure that no elements of racism could resurface. The Army seemed firmly dedicated to smashing any hint of racism. And then September 11th happened and I began to hear new words like ‘towel head’ and ‘camel jockey’ and the most disturbing: ‘sand nigger.’ And these words did not initially come from my fellow soldiers but from my superiors: my platoon sergeant, my company first sergeant, battalion commander. All the way up the chain of command these terms, these viciously racist terms were suddenly acceptable.

When I got to Iraq in 2003 I learned a new word and that word was “Hajji”. Hajji was the enemy. Hajji was every Iraqi. He was not a person, a father, a teacher, or a worker. And it’s important, we’ve heard this word alot during Winter Soldier but it’s important to understand where this word came from and to Muslims the most important thing is to take a pilgrimage to Mecca. It’s the Haj. And taking this pilgrimage is the Hajji. And, it’s something in traditional Islam that is the highest calling in their religion. So we took the best thing from Muslim and made it into the worst thing.

But, history did not start with us and since the creation of this country, racism has been used to justify expansion and oppression. The Native Americans were called savages. The Africans were called all sorts of things to excuse slavery. And Vietnam veterans know of the multitude of words used to justify that imperialist war. So, Hajji was the word we used…it was the word we used on this particular mission I’m going to talk about and we’ve heard alot about different raids and kicking down doors of people’s houses and ransacking their houses. But this mission was a different kind of raid. I never got any explanation for these orders. We were only told that this group of houses, of five or six houses, were now property of the U.S. military and we had to go in and make those families leave those houses.

So, we went to these houses and informed the families that those homes were no longer their homes. We provided them no alternative, nowhere to go, no compensation. And they were very confused and very scared and did not know what to do, would not leave, so we had to remove them from those houses. One family in particular, a woman with two small girls, very elderly man and two middle-aged men, we dragged them out of their houses and threw them onto the street and arrested the men because they refused to leave. Uh, arrested the old man and sent them off to prison. And, at that time I didn’t know what happened to people when we tied their hands behind their back and put a sandbag over their head.

Unfortunately, a few months later, I had to find out. We were short interrogators so I was assigned to work as an interrogator. I oversaw and participated in hundreds of interrogations, one in particular I’m going to share with was a moment for me that really showed me the nature of this occupation. This particular detainee…when I was sent to interrogate him he was stripped down to his underwear, hands behind his back, and sandbag on his head. I never actually saw this man’s face. My job was to take this metal folding chair and just smash it against the wall next to his head, he was faced against the wall with his nose touching the wall while a fellow soldier asked the same questions over and over again, no matter what his answer, my job was to slam this chair against the wall.

We did this until, basically, we got tired. And, I was told to make sure he stood against the wall for however long and I was guarding this prisoner and my job was to make sure he kept standing up. But I noticed that there was something wrong with his leg and he was injured and he kept, like, falling to the ground. And the sargeant in charge would come and tell me to get him up on his feet so I’d have to pick him up and put him against the wall and he kept going down and I’d have to keep pulling him up and putting him against the wall. And my sargeant came around and he was upset with me for not, you know, continue making him to stand. He picked him up and slammed him against the wall several times and then he left and when the man went down on the ground again I notice blood pouring down from under the sandbag. And so I let him sit and I noticed my sargeant coming again and I would tell him quickly to stand up and I realized that I was supposed to be guarding my unit from this detainee and I realized at that moment that I was guarding the detainee from my unit.

We were told we were fighting terrorists, but the real terrorist was me and the real terrorism is this occupation. Racism within the military has long been an important tool to justify the destruction and occupation of another country. It has long been used to justify the killing, subjugation, and torture of another people. Racism is a vital weapon deployed by this government. It is a more important weapon than a rifle, a tank, a bomber or a battleship. It is more destructive than an artillery shell, or a bunker buster, or a tomahawk missile. While all of those weapons are created and owned by this government, they are harmless without people willing to use them.

Those who send us to war do not have to pull a trigger or lob a mortar round. They do not have to fight the war. They merely have to sell the war. They need a public who is willing to send their soldiers into harm’s way and they need soldiers who are willing to kill or be killed without question. They can spend millions on a single bomb, but that bomb only becomes a weapon when the ranks in the military are willing to follow orders to use it. They can send every last soldier anywhere on earth, but there will only be a war if soldiers are willing to fight, and the ruling class: the billionaires who profit from human suffering care only about expanding their wealth, controlling the world economy, understand that their power lies only in their ability to convince us that war, oppression, and exploitation is in our interests. They understand that their wealth is dependent on their ability to convince the working class to die to control the market of another country. And convincing us to kill and die is based on their ability to make us think that we are somehow superior. Soldiers, sailors, marines, airmen, have nothing to gain from this occupation.

The vast majority of people living in the US have nothing to gain from this occupation. In fact, not only do we have nothing to gain, but we suffer more because of it. We lose limbs, endure trauma, and give our lives. Our families have to watch flag draped coffins lowered into the earth. Millions in this country without healthcare, jobs, or access to education must watch this government squander over $450 million a day on this occupation. Poor and working people in this country are sent to kill poor and working people in another country to make the rich richer, and without racism soldiers would realize that they have more in common with the Iraqi people than they do with the billionaires who send us to war

I threw families onto the street in Iraq only to come home and find families thrown onto the street in this country in this tragic, tragic and unneccesary forclosure crisis; only to wake up and realize that our real enemies are not in some distant land. But not people whose names we don’t know, and cultures we don’t understand. The enemy is people we know very well and people we can identify. The enemy is a system that wages war when it’s profitable. The enemy is the CEOs who lay us off our jobs when it’s profitable; it’s the insurance companies who deny us health care when it’s profitable; it’s the banks who take away our homes when it’s profitable. Our enemies are not 5000 miles away, they are right here at home. If we organize and fight with our sisters and brothers, we can stop this war, we can stop this government, and we can create a better world.

I get it. I understand why people feel the need to express themselves. But I’ve always been critical of people who get ordinary, run-of-the-mill, everyday tattoos. Why bother if your tattoo is like everyone else? Over the last year I’ve been collecting my favorites.

Wild thing, I think I love you. 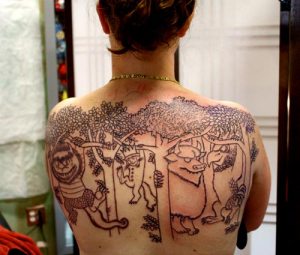 Everything tastes all inky.

Check out my muscles.

This guy stole the tattoo from Rudy Giuliani. 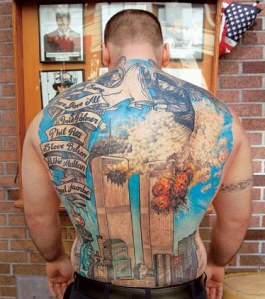 Not too many people know about the rare penis butterfly. Please note the Prince Albert.

I’d like Patrick Swayze as a centaur and please fuck up the face a little bit.

Could this be Stephen Colbert’s arm? It seems like something he’d do.

There will be a slight delay as we go thru security at the airport.

Work hard and one day you could have six pack abs. 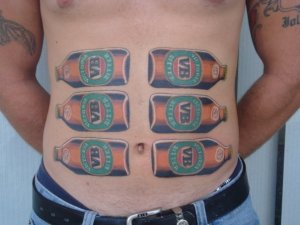 I saw this in a dream once. 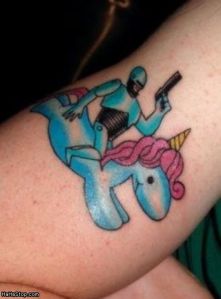 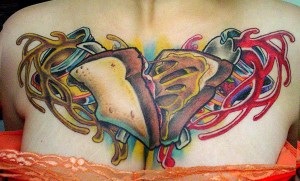 Wookie Tattoo – Judging from the amount of hair this may be a tattoo of his mother. 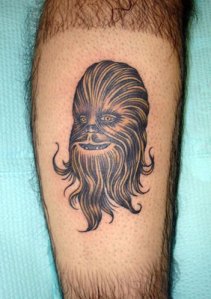 Yeah, this one’s a little creepy.

This one requires you polish your head twice a day.

My personal favorite: I don’t know why.

This one came with a free happy meal. Sponsored by McDonalds

They call him nipple buns.

It’s the hot ice you gotta look out for.

Another problem going thru airport security.

What a cute kitty.

The Simpsons never get old.

Can’t wait to show you grandchildren this one:

He may be from Roswell. 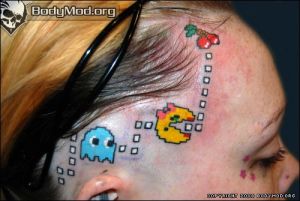 Chuck Norris. A tattoo that will give you a round house kick to the face.

How do you even ask for this one? 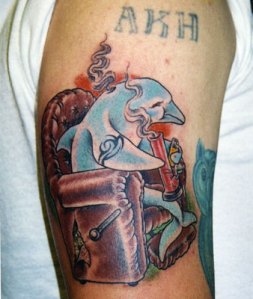 No tramp stamp. She likes to ride bikes.

Snakes on a Plane. A move classic. 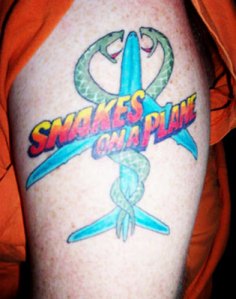 Why would you have it crying? 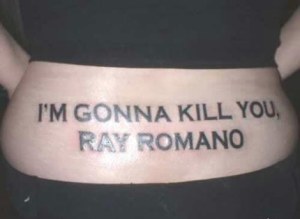